Males are significantly larger than females, and are easily recognized by their large horns. Both sexes are an overall chestnut brown color; this is strongest on the back, and fades to gray on the flanks before merging with the pale underparts (including the throat and chin). The fronts of the legs are black, with striking white bands above the hooves and, on the forelegs, above the 'knees' (carpal joints). Males have a black beard on the chin; older males also have very dark chests and a dark band along the flanks. Both sexes grow horns. Those of females are slender and slightly arched. The semicircular horns of males are very massive and have pronounced knobs on the front surfaces (mature males may have over ten such knobs).

The principal breeding season is between March and May, although some breeding occurs year-round (particularly in younger animals). The majority of offspring are born in September and October.

Walia ibex are typically most active in the early morning and late afternoon, with a distinct resting period in the middle of the day. While foraging on plateaus, they frequently associate with gelada baboons and will respond to alarm calls made by the primates. Home ranges for males may be greater than 3 km2, while females tend to inhabit smaller areas (one observed female used 0.5 km2).

Family group: Variable throughout the year. Typically small mixed groups, averaging three individuals. Larger groups with at least eleven individuals have been seen. Males tend to be sociable than females.
Diet: Leaves (especially young leaves) of trees and shrubs, grasses, and lichens.
Main Predators: None; leopards and hyenas inhabit the forests at the bases of the cliffs, but the inaccessible habitat affords significant protection. Birds of prey may take young kids.

Open grassy plateaus and adjacent steep slopes and cliffs at high altitudes (2,800-3,390 m). Walia ibex are only found in the Simien Mountains of northern Ethiopia, mostly within the Simien Mountains National Park. Within the park, they are most often seen along a 25 km stretch of the northern escarpment. The approximate range is depicted in the map below. 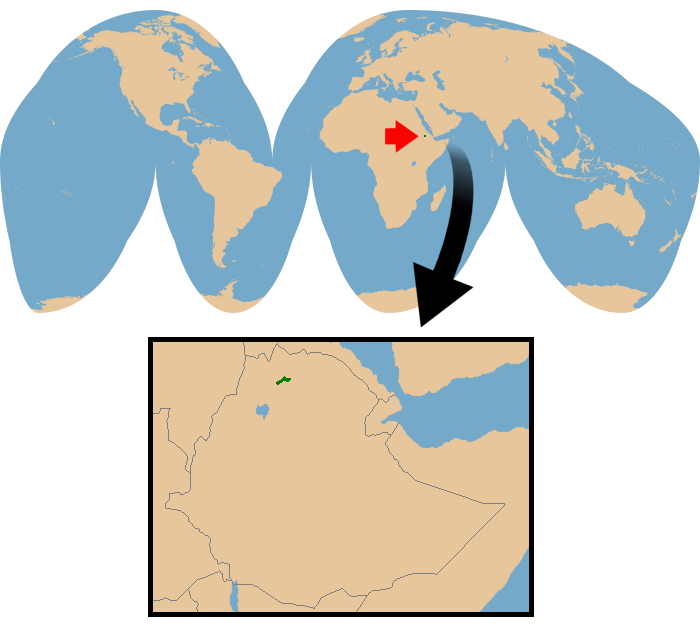 The total population is estimated to be perhaps 500 individuals, with fewer than 250 mature (breeding) animals. The population appears to be slowly increasing, but restricted habitat and encroachment by people are limiting factors.